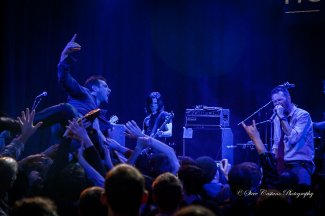 
Howard Theater is a historical event and concert hall located in northwest Washington, DC. Originally opening its doors in 1910, Howard Theater hosted legendary acts such as Cab Calloway, Duke Ellington, Lena Horne, Otis Redding, and many many more. During the early 1980’s, Howard Theater closed its doors and became just a shell of it original glory and a shuttered neglected building.

But, in 2012 lead by Howard Theatre Restoration, Inc, the doors of the majestic Howard Theater were open again. The renewed Howard Theater now includes a gift shop and museum. The theater host a weekly Gospel Brunch and popular acts such as Wale, Chaka Kahn, Miguel, Brandy, Boyz II Men and many more.
Holiday Inn Washington DC - Central/White House is recently renovated, with upgraded amenities. You'll find impeccable service at one of the most convenient locations in Washington, DC. Modern hospitality and our friendly staff are eagerly awaiting your visit. The hotel is walking distance to monuments, museums, and the business district. Major attractions are only minutes away.

The Hotel is located at the northwest corner of 15th street & Rhode Island Avenue, NW.

Explore our site for more information about our excellent location and superior amenities. Reserve accommodations below

RATES AND AVAILABILITY FOR THE HOLIDAY INN WASHINGTON DC


All information on Holiday Inn Washington-Central/White House is deemed to be accurate at the time we add it, and we take steps to verify all details and update our records when new information is provided, but as people, events and circumstances change, we caution users independently confirm all information.